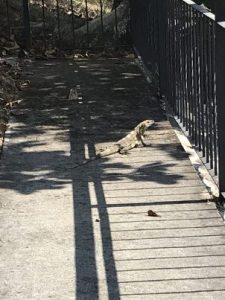 Today on my way back from swimming my laps, I was surprised to see my little friend completely unfazed by my appearance. He (I was told recently that it is actually a he because it is smaller than the females that run around on the property) and I  gave each other lots of space and all was well until my husband began his descent on the stairs with our dog. At that point, Iggie couldn’t get away fast enough! I was afraid he would get caught between the pickets of the iron fencing but I needn’t have worried, it is apparently something he does quite regularly.
I was happy I got to take this picture from a close range. It shows Iggie’s comfort level and this makes me feel good. When we first arrived to this small town, I gave people the impression that I was a very serious and stern person. I don’t really know why that was, although I don’t go around laughing at nonsensical things, I don’t consider myself a dour person and when I heard someone threaten their child by using me as the person who would mete punishment, I was very upset. I didn’t even know the kid or vice versa. I later found out that people would just make certain assumptions having to do with our income level and degree of education. It made me a little more sensitive to other people’s perceptions of me and I tried my best to smile whenever I passed neighbors on the road. I guess it applies to animals too because the dogs on the road used to bark or snarl at me and now they and I keep our distance but leave each other alone.
Peaceful co-existence is a good thing in this marvelous world we all inhabit.
picture of Iggie my own